The Day of Clouds and Thick Gloom

The Day of Clouds and Thick Gloom

Parents, do you not have a similar goal spiritually? You want to guide your children to serve Jehovah. You want your children to feel as did the psalmist who wrote: “To do your will, O my God, is my delight, and your law is deep within me.” Young ones who develop such appreciation will dedicate their life to Jehovah and get baptized. Understandably, they should take such a step when they are mature enough to make that decision and have a genuine desire to serve Jehovah. What, though, if your children do not seem to be making spiritual progress—perhaps even questioning their faith? Strive to inculcate in them a love for Jehovah God and an appreciation for all that he has done. Then when they are in a position to do so, they will be able to make a personal decision about worshipping God.

The 34th chapter of Ezekiel is a prophecy. Ostensibly it was directed to Israel. In reality it applies to Christians at the time of Christ’s return. The Watchtower is well aware of this correlation. But, because Bethel is committed to teaching the lie that Christ has already come they are compelled to interpret prophecies in rather odd ways.

That is certainly the case with the 34th chapter of Ezekiel. Although it is addressed to the negligent “shepherds of Israel” the Watchtower has concocted its own peculiar designation of “political shepherds.” Who are said “political shepherds,” you ask? They are the rulers in the realm of Christendom. And their mistreatment of the flock that Jehovah supposedly entrusted to them was demonstrated over centuries of slaughter, when Catholic fought and killed fellow Catholic and Protestants fought against their fellow religionists, etc. Jehovah’s true sheep were persecuted by the “political shepherds” during the past world wars.

According to the Watchtower,  God’s true shepherd, David, came in 1914 and ever since then Jehovah’s sheep have been enjoying nothing but the finest pasturage of spiritual food and care.

However, there are numerous problems with that interpretation; foremost, the fact that God actually expected the negligent shepherds to care for his sheep. Here is what Jehovah has said: “Is it not the flock that the shepherds should feed? You eat the fat, you clothe yourselves with the wool, and you slaughter the fattest animal, but you do not feed the flock. You have not strengthened the weak or healed the sick or bandaged the injured or brought back the strays or looked for the lost; rather, you have ruled them with harshness and tyranny. So they were scattered because there was no shepherd; they were scattered and became food for every wild beast of the field. My sheep were straying on all the mountains and on every high hill; my sheep were scattered over all the surface of the earth, with no one searching for them or seeking to find them.”

Here are a few questions thinking Jehovah’s Witnesses ought to ponder: Why would God entrust his precious sheep to incompetent tyrants in the first place? Is it reasonable to expect dictators and worldly rulers to go looking for Jehovah’s lost sheep and minister to them in any meaningful way? Another question might be: Why does the Watchtower consider the common churchgoer to be Jehovah’s sheep whom God expects the “political shepherds” to look after in his behalf? And what would be the end result if such “political shepherds” were to actually shepherd Jehovah’s people and tend to their wounds?

“MY SHEEP WERE SCATTERED”

It is inconceivable to Jehovah’s Witnesses that the prophecy could actually apply to Christian shepherds. Just as it is also incomprehensible that Christ did not come in 1914.

Ironically, it is this very mind-lock prevalent among Jehovah’s Witnesses from the top down —what Paul referred to as a “deluding influence” —that has insured that God’s sheep will be scattered during “the day of clouds and thick gloom,” which the Watchtower has deluded the flock into supposing occurred during the dark days of the First World War. 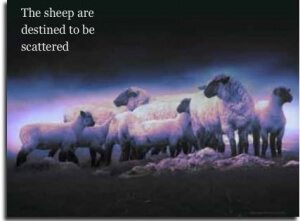 The very fact that the Watchtower would apply the 34th chapter of Ezekiel to parents teaching their children demonstrates that Bethel has no interest in actually examining the significance of the denunciation of the shepherds of Israel.

Due to their obvious neglect subsequently the Christian Congregation of Jehovah’s Witnesses  has no expectation of any sort of sudden visitation of  Jesus Christ to initiate the judgment of the house of God —against the backdrop of world war, pandemics and all the rest, which the Watchtower has assured their flock cannot possibly take place since all the things Christ foretold took place long, long ago. Consequently, Christian elders will be poorly equipped to hold their congregations together during that time of darkness.

In furtherance of the delusion, the Watchtower claims that all of God’s flock has already been gathered into the spiritual paradise associated with the Watchtower Society. However, Jesus foretold of a gathering that is to take place during the tribulation. And certainly, it is the great tribulation, the world’s darkest period, that is designated in prophecy as “the day of clouds and thick gloom.” Here is what Christ said: “Immediately after the tribulation of those days, the sun will be darkened, and the moon will not give its light, and the stars will fall from heaven, and the powers of the heavens will be shaken. Then the sign of the Son of man will appear in heaven, and all the tribes of the earth will beat themselves in grief, and they will see the Son of man coming on the clouds of heaven with power and great glory. And he will send out his angels with a great trumpet sound, and they will gather his chosen ones together from the four winds, from one extremity of the heavens to their other extremity.”

The political “shepherds” of Christendom have fought among themselves, one professed Christian ruler against another so-called Christian ruler, and have sacrificed their sheeplike people on the altar of nationalism or religious sectarianism. Some political rulers that have been outstanding favorites of the religious clergy have been dictators. – Know Jehovah

If there is to be a gathering the implication is that there will be a scattering of the sheep beforehand. And no doubt that is implied in what Jesus foretold as regards many being stumbled and hating and betraying one another.

For those who may not be convinced of the artificiality of the Watchtower’s interpretation of Ezekiel’s prophecy, consider what is presented in the 30th chapter in connection with the sudden overthrow of “Egypt.” Concerning it Ezekiel 30:2 says: “For the day is near, yes, a day of Jehovah is near. It will be a day of clouds, an appointed time of nations.”

There are four chapters devoted to the downfall of Egypt and the Watchtower long ago recognized that “Egypt” was a type of something far more relevant than the ancient nation on the Nile. Although Bethel’s identification of modern Egypt as being comprised of all nations cannot possibly be authentic since the prophesy compares the greatest nation to lesser ones, at least they understood that the “day of clouds” is a symbol of the tribulation, which Jesus also indicated would be a dark time, as if the sun and moon will be darkened.

Of course, Jehovah foresaw the dishonest way in which the shepherds would deal with his word and that is why in the 13th chapter of Ezekiel God referred to the prophets of Israel as “the stupid prophets.” Jehovah commanded his watchman to say to them: “Son of man, prophesy against the prophets of Israel, and say to those who fabricate their own prophecies, ‘Hear the word of Jehovah. This is what the Sovereign Lord Jehovah says: ‘Woe to the stupid prophets, who follow their own spirit, when they have seen nothing! O Israel, your prophets have become like foxes among the ruins. You will not go to the broken places in the stone walls to rebuild them for the house of Israel, so that Israel may keep standing in the battle in the day of Jehovah. They have seen false visions and foretold a lie, those who are saying, ‘The word of Jehovah is,’ when Jehovah himself has not sent them, and they have waited for their word to come true. Is it not a false vision that you have seen and a lie that you have foretold when you say, ‘The word of Jehovah is,’ when I have not said anything?”’

It is certainly an apt description of the leadership of the Watchtower. They have fabricated their own prophecies; no, not out of thin air —seemingly based upon biblical prophecy, but only seemingly. Theirs’ is a false vision and a lie. They claim to have seen an invisible presence of Christ and have waited for over a century now to have their false vision vindicated —but in vain.

During the day of Jehovah their whitewashed wall will  topple and the sheep will be scattered. The stupid prophets will then resemble foxes among the ruins —the ruins that were once the venerated Watchtower. And they will have no part in the shepherding that “David” will perform in the future.

Here are more commentaries on the fascinating prophecy of Ezekiel