Covid 19 and the Machinations of Satan

Covid 19 and the Machinations of Satan

Do you see CV19 as a machination of Satan to slow the preaching work, or, as Jehovah causing what the Watchtower deserves?

The lockdown has impacted Jehovah’s Witnesses, that is for sure. A couple of months ago who would have imagined that the Watchtower would shutter every kingdom hall, cancel assemblies and the summer conventions and cease the public ministry? But unless something unexpected happens in the short term the health emergency is going to pass soon. Already some states in the United States are lifting the restrictions. For example, here in Michigan, the auto plants are coming back online next week; although, apparently there is a glut of unsold automobiles piling up already. Surely, though, by the beginning of summer, everything should start opening up and getting back to “normal”— at least as far as being allowed to move about without restrictions.

Besides, I would think many of Jehovah’s Witnesses have enjoyed the break from the routine of meetings and service and have hopefully used the time to catch up on other things, or just get some needed rest.

However, that is not to say the pandemic is not a wicked device of the Devil. As I have written about and discussed before, the operation of Satan, about which the inspired apostle wrote, has to do with convincing Christians that the parousia has begun and the day of Jehovah is here. To that end, the Devil is allowed to wield a deluding influence through a man of lawlessness backed up by  “every powerful work and lying signs and wonders and every unrighteous deception.”

Since the seven times and all that chronological claptrap can be easily debunked and the fact the Bible Students originally believed the parousia began in 1874 and they were looking to 1914 as the end, it seems plain enough to me that Satan inspired the 1914 expectation and then delivered the war, persecution and the pandemic right on time as powerful lying signs to back up the parousia delusion.

Given the fact that the Watchtower was quick to declare the COVID 19 pandemic as more proof that Christ began ruling the world in 1914 and that we are now in the final days of the final part of the days, it seems likely that this event is one more demonically inspired “unrighteous deception” to reinforce the delusion that Christ has already come. (See article: Are These the Last Days?)

But there is more to it. Since the election of Trump and Russia’s intervention in the Middle East to stop the Anglo empire from destroying Syria, the covert war machine has been unleashed. The British are going to stop China’s phenomenal One-Belt One-Road program one way or the other– along with Trump’s intended cooperation with Russia and China.

Over the course of the past 4 years, the British and their assets in the CIA and FBI and the media have tried everything to destroy the presidency of Donald Trump. There was the Russia-collusion hoax. Then there was the farcical impeachment. Somehow Trump survived the coup. But no sooner did the impeachment scheme fail the pandemic began. Coincidence? I doubt it.

Obviously, the president’s Achille’s heel is the economy. He has, after all, routinely boasted that he built the world’s greatest economy. Who could argue against it? Unemployment was at a record low. Stock markets at all-time highs. The president re-worked trade deals with China and other nations. Through the miracle of fracking shale, the US even became the world’s top oil producer.

Then, one day: KABOOM! Everything had to be shut down. Now Trump has to run his re-election campaign with the Great Depression 2.0 as his “accomplishment.” So, obviously, there is a very powerful political motive for creating as much economic chaos and misery as possible from now until the presidential election in November. 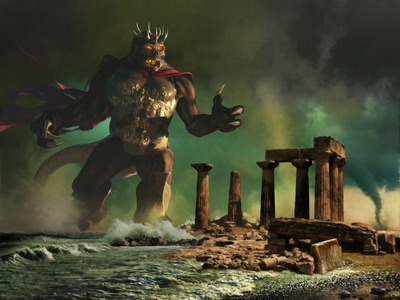 As regards prophecy and the unusually ferocious beast is described in Daniel as crushing and treading down the nations, that is what the British Empire has been doing for as long as it has existed. The British have orchestrated two world wars, countless coups and revolutions, such as in Ukraine recently. They have flooded the world with heroin and cocaine. Through the IMF and World Bank economic hitmen (YouTube) have destroyed third world nations through financial chicanery.

The Anglo beast is not going to permit the Chinese to continue to engage the downtrodden nations of Asia and Africa in a mutually beneficial nation-building program. It is simply not going to be allowed. International cooperation does not align with the empire’s policy of divide and conquer. Neither are the globalists going to allow any baseball cap-wearing president to make America great again. It ain’t happening.

To that end, it seems most probable that the pandemic was intentional— but not on the part of the Chinese. People are naive if they think it is beyond the capacity of the globalists to engineer a pandemic from within China.

Not only is the resulting emergency being used as the pretext to force another multi-trillion-dollar bailout of the bankrupt financial system, but the empire gets the added bonus of adding one more load of crushing debt on nations, corporations, states, municipalities, households— you name it. And the diabolically genius part is that now the empire is calling for everyone to hold China financially responsible for the catastrophe. Brilliant!

Remember back in December when the city of Wuhan was locked down? The Western media bashed China for being so heavy-handed in trying to quash the outbreak. Even as the virus started to show up in other parts of the world news agencies were claiming it was nothing to worry about. Now, the same media and politicians are claiming China didn’t do anything and as a result, allowed the world to be infected and must be held accountable. People have such short memories.

One British mouthpiece falsely claimed that China was allowing airplanes to fly out of Wuhan as late as January. Not true.

So, the world is being infected— not only with a microscopic pathogen, but with a much more insidious virus in the form of pernicious propaganda that is intended to infect minds with suspicion and sicken peaceful relations between nations and ultimately create the environment to plunge America and Europe into civil war and even war with Russia and China— a war that will most surely escalate into a nuclear exchange.

Then the worldwide work of Jehovah’s Witnesses will be permanently shut down. Satanic machinations, indeed!