The Coming of Christ or the Fall of Babylon the Great?

The Coming of Christ or the Fall of Babylon the Great?

After a long time, the master of those slaves came and settled accounts with them.—Matt. 25:19.

Jesus will come to settle accounts with his slaves toward the end of the great tribulation just ahead. What leads us to this conclusion? In his prophecy recorded in Matthew chapters 24 and 25,  Jesus repeatedly mentioned his coming. Referring to the judgment during the great tribulation, he said that people “will see the Son of man coming on the clouds of heaven.” He urged his followers living in the last days to be vigilant, saying: “You do not know on what day your Lord is coming” and “the Son of man is coming at an hour that you do not think to be it.”  Hence, when Jesus said that “the master of those slaves came and settled accounts,” he was evidently referring to the time when he will come to execute judgment at the end of this system.

Jehovah’s Witnesses have no recourse but to gratefully accept whatever the “slave” feeds them without questioning or complaint, but if you are one of Jehovah’s Witnesses how would you explain it to a householder if they asked you for some sort of evidence, any indication that the United Nations is inclined to carry out such an attack any time in the future? Could you find such information in a Watchtower or AWAKE?

In the entire decade from 1992-2002 when the Watchtower was an associate level NGO with the UN’s Department of Public Information and had access to the Dag Hammarskjöld Library, did the Society unearth anything that might indicate the UN has a policy or is formulating a policy to liquidate religion? Really, quite the contrary. The Watchtower and AWAKE! frequently praised the UN for standing up for human rights —the freedom to practice one’s religion being a basic human right. And since dissolving their secret partnership back in 2002 they have not published anything quoting UN officials or other leaders calling for religion to be abolished.

This is the Information Age, is it not? The UN has numerous websites for their plethora of agencies and supportive NGOs. Is there anything out there, anything, anywhere, that indicates the UN is inclining to move against religion? I have tried to keep a pretty close watch on such things over the past quarter of a century and I have not seen any indication. And you may be certain that if there was anything Jehovah’s Witnesses would be all abuzz about it. But they are not. And their silence is telling.

Just to be clear, I am not disputing the Watchtower’s interpretation of the 17th and 18th chapters of Revelation regarding the eighth king devouring the woman who is called Babylon the Great. I am disputing the timing —that it is the next big thing on the prophetic schedule.

The irony is, virtually everything the Watchtower teaches that is based on prophecy is wrong —except their teaching that the end of false religion is in the future. Allow me to explain.

Because the Watchtower is committed to 1914 and virtually all prophecy has been tied to it in one way or another there is no prophetic basis for Jehovah’s Witnesses to realistically expect the United Nations to suddenly set out on an international, anti-religious pogrom. That is why there is nothing that can be presented to any sincere householder who might ask for some kind of evidence to back up what the Watchtower claims.

What the Governing Body refuses to accept, is that the coming of Christ is itself a future event —including the beginning of the time of the end and the parousia. True, the day’s text and the WT article it is based upon place the coming of Christ during the tribulation. But the WT asserts that his coming on the clouds to judge the nations is the same as his calling his slaves to account. This is a blatant contradiction of the fact that Christ first comes to judge his slaves.

On the one hand Bethel claims that the messenger of the covenant came to judge the house of God back in 1919. In this text though they claim that Christ is “evidently” coming in the future to settle accounts with the house servants. Which is it?

Besides, the seven times chronology has no legitimate connection to the appointed times of the nations to trample Jerusalem, about which Jesus spoke. And other than the chronology the Watchtower’s attachment to 1914 is based on the assumption that all the things Christ foretold cannot occur in the future. Jehovah’s Witnesses have been assured that the composite sign of Christ’s supposed invisible presence is as unique as a human fingerprint and cannot be duplicated.

While it is true the events making up the sign of the conclusion will be unique, their error is due to the fact that even according to their own writings all the events that make up the composite sign of Christ still have not all occurred —this after a century and counting! It would certainly behoove Jehovah’s Witnesses to take a closer look at 1914.

While Jehovah’s Witnesses may not be able to find any indication that the nations are scheming to destroy all organized religion, is there any basis for believing another world war is on the horizon? Of course there is.

As an anecdote, some months back an exJW with a popular blog commented on a Tweet of mine asking why I focused on world war. Apparently he was irritated that I was pointing to a future day of reckoning. He, like the Watchtower, is simply in denial. It is an infant’s reasoning: Don’t believe it and maybe it will go away.

The fact is, though, many, many people are aware of the developing series of crises that is drawing the Anglo-American Empire into conflict with Russia and China —a conflict that would most surely go nuclear. It seems most people are aware, at least to some degree, that there is trouble brewing  —most people, except Jehovah’s Witnesses. That’s because the leadership has not said a word about it. They see no significance in world events. They are oblivious, which is on full display in today’s text claiming the fall of Babylon the Great is just ahead.

What is just ahead is global war, financial collapse, food shortages —all the things Jesus foretold —including men become faint with fright due to the horrific things coming upon the world. The present ruling Anglo-American duo will fall with a great crash —something the Watchtower implies took place during the First World War. From the ashes of that collapse will arise the two-horned beast that will then begin speaking as a dragon —commanding that an image of the seven-headed beast be made and worshipped —something that the Watchtower claims took place in 1922 with the creation of the League of Nations. Thus, will arise the eighth king for his foretold one-hour reign. And seated on the beast will be the prostitute called Babylon the Great. 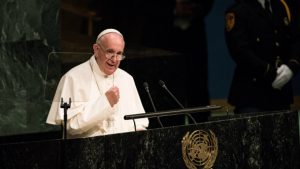 Already a move is afoot to merge religions into a united religions organization to mirror the United Nations. In 2014 the former president of Israel, Shimon Peres, met with Pope Francis to propose this very thing. Since then the Pope has made comments to the effect that all religions are the same. This may be the groundwork for some sort of one-world religion to emerge in the post-crash world.

That would explain why Babylon is pictured as a great city —a single organization.

But at that time the eighth king – likely in the form of the UN since it already has the bureaucratic infrastructure in place to govern the world – will have acquired control over the vast military capabilities of the fallen American kingdom and that of other nations as well. There is also an intention on the part of the financier oligarchy to sink the Dollar and Euro and replace them with a global currency administered by the United Nations and the IMF —not sovereign nations. That will spell the end of the nation-state system. The United Nations will become the capital of a communistic world government. Then, and only then, will the beast have the teeth to devour the harlot.

That the eighth king will possess incontestable power is evident from the fact that the kings and merchants of the earth are said to stand at a distance for fear of her torment.

In a nutshell there are earthshaking events that must take place prior to the judgment of Babylon the Great —unforeseen events, which will completely discredit the Watchtower and shake the faith of Jehovah’s Witnesses to their core.