The Coming of Christ in the Glory of Jehovah

The Coming of Christ in the Glory of Jehovah

QUESTION #8 – According to John 12:41, John says Isaiah saw Jesus’ glory and spoke about him. The New World Translation has a cross reference pointing back to Isaiah 6:1,8. There, Isaiah saw Jehovah and spoke about him. There is even a cross reference pointing to John 12:41. So the Watchtower agrees that these scriptures are related. How can both passages of scripture be true unless Jesus is Jehovah?

ANSWER – Cross references in any translation should not necessarily be construed as an interpretation or all-encompassing explanation of a particular verse, especially when it involves prophecy. That is because prophecy may have multiple meanings. But, the context should be considered foremost.

The folly of the trinitarian’s one-verse-says-it-all approach is on full display in the 12th chapter of John, from where the supposed proof text was extracted.  The setting was Jesus’ last sojourn to Jerusalem before he was arrested. While in the temple courtyard he cried aloud, asking for his Father to glorify his name — a name that appears in the text of Isaiah alone over 500 times. In response to Jesus’ request Jehovah spoke from the heavens and said: “I have glorified it and will glorify it again.”

The crowd heard the voice of God. However, some speculated that an angel had spoken to Jesus. Others imagined that it thundered. Jesus explained: “This voice has occurred, not for my sake, but for your sakes.” It was yet another occasion when God spoke from above to confirm that Jesus was his Son.

Jesus said this in response to the question put to him by the Jews, when they said: “We heard from the Law that the Christ remains forever. How can you say that the Son of man must be lifted up? Who is this Son of man?”

The Jews, including the apostles at the time, could not comprehend why Jesus said he was going to be lifted up —as in hung upon a crude pole or stake that would be lifted up and dropped into a hole in the ground. Indeed, if Jesus was the messianic king the prophecies foretold, such as found in Isaiah, then the Christ must reign forever. They were ignorant of the fact that Isaiah also foretold that Jehovah’s servant would be crushed, that God himself would take delight in crushing him and seeing him pour out his soul to the very death. Indeed, he would be buried in death. This is stated in the 53rd chapter of Isaiah: “For he was cut off from the land of the living; because of the transgression of my people he received the stroke. And he was given a burial place with the wicked, and with the rich in his death, although he had done no wrong and there was no deception in his mouth.  But it was Jehovah’s will to crush him, and he let him become sick. If you will present his life as a guilt offering, He will see his offspring, he will prolong his days, and through him the delight of Jehovah will have success.”

A question thinking Jews should have considered is this: How could a person be cut off from the land of the living, yes, be buried in death, and yet prolong his days and see his offspring? There is only one solution to the perplexing riddle. Jehovah would resurrect him, recovering him from the grave. No doubt the implied resurrection of the Christ, which is unquestionably one of the most glorious miracles ever to be performed by God, is how Isaiah saw beforehand his glory and spoke about it in his prophecy.

Another aspect is this: Just as on that occasion Jesus urged the Jews to walk in his light while it existed, Isaiah also saw beforehand the glory of Christ as the light of mankind. Writing in the 9th chapter Isaiah said: “However, the gloom will not be as when the land had distress, as in former times when the land of Zebulun and the land of Naphtali were treated with contempt. But at a later time He will cause it to be honored—the way by the sea, in the region of the Jordan, Galilee of the nations. The people who were walking in the darkness have seen a great light. As for those dwelling in the land of deep shadow, light has shone on them.” 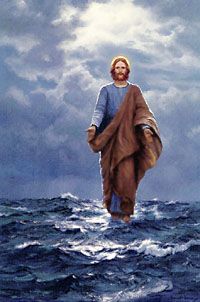 As is common knowledge, Jesus was from the region of Palestine known as Galilee. He performed many of his miracles in the area, even walking upon the Sea of Galilee and calming its tempestuous waves. Surely the apostles who witnessed Jesus’ astounding miracles and heard him preach recognized that he was a bright, shining light. In this way Isaiah saw his glory and spoke about him.

But prophecy is like an onion, with many layers. It is true, Isaiah experienced a rapturous epiphany when he envisioned Jehovah seated on a lofty throne surrounded by worshipping seraphs. It was on that occasion that Isaiah was commissioned by Jehovah to go to the nation and speak God’s judgments to them.

However, the prophecy does not merely apply to Isaiah’s day, nor to the first century when Jesus came from Galilee. More especially it applies to the second coming of Christ. For example, the sixth chapter of Isaiah concludes, saying: “But there will still be a tenth in it, and it will again be burned, like a big tree and like an oak, which after they are cut down leave a stump; a holy seed will be its stump.” The holy seed that survives the felling of the national “tree” in one sense was Christ, whose royal lineage was unbroken even though the nation was cut down. But more is involved than Jesus.

Those who belong to Christ are also the holy seed – the tenth. As the prophecy of Isaiah details, Christ’s congregation is destined to be destroyed too, just as was Israel and Judah. It is from that destruction that a holy seed will survive. Revelation speaks of the seed of the woman surviving a flood of Satan’s persecution during the tumultuous conclusion. That is the burning of the stump, again, from which comes the end result.

Not coincidently, the name of Isaiah means the same as Jesus’ own name; namely, Jehovah is salvation —or, salvation of Jehovah. Just as the Jews in Jesus’ day were spiritually blind, the blindness of God’s people might be considered a sub-theme that runs through the entire prophecy of Isaiah, not merely in the 6th chapter. That being so, the blindness extends down to those who will be on hand when Christ returns in the glory of Jehovah. And their blindness will only be remedied by their seeing Christ in his glory. Isaiah words it this way: “Arise, O woman, shed light, for your light has come. The glory of Jehovah shines on you. For look! darkness will cover the earth and thick gloom the nations; but on you Jehovah will shine, and on you his glory will be seen.”

Not only did Isaiah see the glory of Jehovah in the initial vision, but he saw the ultimate unveiling —indeed, the manifestation and revelation of Jehovah’s Christ. As an end result, it is as Jesus said: “the chosen ones will shine as brightly as the sun in the Kingdom of their Father.”

In that sense Jehovah will shine upon them and the glory of Jehovah will be manifested in Jesus when he comes in the glory of his Father and sits down on his glorious throne with all of God’s angels surrounding him, including the seraphs who were attending to Jehovah in the initial vision. In that respect, Isaiah certainly did see Jehovah’s glory yet to be revealed.