The election of Donald Trump seems to have shaken the ruling establishment to its core like nothing before, more so with each passing day he is in office —now, almost a month.

Astonishingly, he is implementing many of the policies he campaigned on, which is unheard of in politics. But the political battle over immigration or Obama Care is not the real fight. Whether president Trump is aware or not, if he is to make good on his promise to “make America great again” it will require taking on the City of London —the British Empire, the crown at the nexus of what otherwise goes by the name of Wall Street and globalization. That is a formidable task.

Taking on the financial pirates that have a stranglehold on the nations of Europe and America is the real fight, as far as politics are concerned. (As Christians we know the ultimate war is against the spirits in high places, the demons that influence this dark world. My interest in these matters concerns prophecy and the developments that precede the coming of the Lord Jesus.)

The re-instatement of Glass-Steagall —a law that was originally enacted by FDR during the Great Depression to reign in what he called the “economic royalists,” prevented banks from using depositors’ money for speculative purposes. It was repealed about 20 years ago, but is considered a necessary first step in clawing back national sovereignty from the imperial money-masters.

The re-instatement of Glass-Steagall is a plank in both the Republican and Democratic party platforms and Trump voiced his support for it. And a couple of weeks ago the bill was re-introduced in the US Congress.

Of course, Wall Street claims that even if Glass-Steagall had been in force it would not have prevented the crises that rocked the financial system in 2008, and which cost taxpayers trillions to bail out the banks. But it is most telling that the last time Glass-Steagall came up for consideration a few years ago a spokesperson in London intimated that the City would consider the re-enactment of Roosevelt’s law a hostile act.

Think of that, American lawmakers, who have a sworn duty to promote the general welfare and protect the citizenry from being plundered and defrauded, were warned by a foreign power that any attempt to impose controls over their financial scheme would be considered the same as an act of war.

Whether or not the Glass-Steagall Act becomes law again remains to be seen, but the mere threat that America might extract itself from the debt trap the empire has covertly put in place —that some audacious, ball-cap-wearing billionaire might actually try to make America great again, including the re-enactment of Glass-Steagall, could be the trigger that forces the Crown to unleash the empire’s dogs of war.

The struggle now reaching a flashpoint is not a new conflict. It is as old as America itself, that being the ongoing contest between the British Empire and the breakaway colonies that became the United States of America. The Revolutionary War did not settle anything. Neither did the War of 1812 or the Civil War, during which the British supported the Confederacy. Those wars were merely battles in an ongoing conflict between nation-states and what has largely become an invisible empire in the hands of a small clique of ultra-wealthy lords grouped around the British Crown. (Did you know the British Crown property comprises 1/6th of earth’s land mass?

After the First World War, the British hatched the idea for a League of Nations with the intention of using it as an extension of the British Empire. It was a severe setback to their scheme that the so-called isolationist policy of the US influenced the Senate who refused to ratify the agreement. 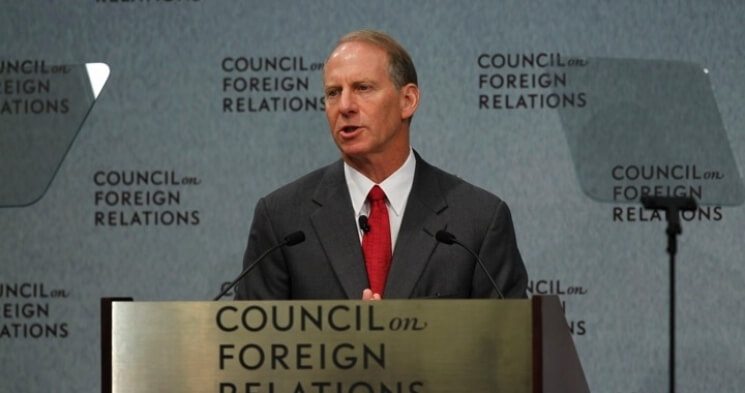 About that same time the British set up the Council of Foreign Relations, an American sister organization to the Royal Institute for International Affairs, otherwise known as Chatham House, so-called think tanks, for the purpose of recruiting influentials within the media, education, business, and politics, using them as a conduit for injecting British imperialism into the American narrative. As a reflection of the CFR’s influence American isolationism has successfully been replaced with globalism, that is, until Trump reasserted the hated nationalism of putting America first. Not surprisingly, the Council’s president, Richard Haass, who is a frequent guest on “news” channels, is one of the foremost promoters of war with Russia, a peddler of the absurd fiction that Russia invaded Ukraine.

Given the recent wars the US has launched in the Middle East it is apparent that London has largely achieved its goal of taking over American foreign policy and using the much greater war-making capability of the United States to carry out London’s goal of global domination.

One of the strategic goals of the Empire over the past 200 years has been to prevent the United States and Russia from forming any kind of alliance. There seems little question that agents employed by London financed Lenin and Trotsky and the Bolshevik Revolution in order to destroy Russia and prevent the Tsar from adopting Lincoln’s American model, which it was in the process of doing prior to WWI.

But due to Hitler taking over Europe the United States and Russia became allies and crushed the Nazis. Interestingly, like the communists who looted Russia, Hitler was also financed by agents of the empire, including the banker father and grandfather of two American presidents, one of whom was knighted by the Queen, apparently for services rendered.

But very quickly after the war, London launched a scheme to pit the victorious allies against each other. Less than a year after the Second World War ended Winston Churchill came to Fulton Missouri and announced that the Iron Curtain had fallen on Europe and that the British and American allies had entered into “a special relationship.” Historians mark the beginning of the Cold War to Winston’s speech. And to whip up communist hysteria in post-war America, a senator by the name of Joseph McCarthy insinuated that the government, especially the State Department, supposedly had been infiltrated by over 200 Soviet agents. Talk about fake news!

Fast forward to the early ’90s, with the dissolution of the USSR and the reunification of Germany the empire moved to place restraints upon Germany in order to prevent it from becoming the dominant power of Europe. Hence, in 1993 the Maastricht Treaty brought the European Union into power. Since then Brussels has become the administrative capital of Europe, effectively subverting the democracy of individual nations of the union. That is why the wave of populism that swept Trump into office in America is also rising in Europe.

As Russia struggled to recover from the looting imposed upon it by western bankers after the collapse of communism, the United States was deployed as London’s dumb giant to destroy nations in the Middle East with the goal of taking out Iran. However, the Plan hit a snag when Vladimir Putin intervened in Syria. It looked as if war between the nuclear powers was imminent.

But Trump has made it clear that he is opposed to the disastrous regime change policy of his presidential predecessors. To the horror of the so-called neocons, the maverick president has said he would welcome cooperation with Putin in order to wipe out Islamic terrorist organizations. As a result, a phenomenon reminiscent of McCarthyism in the early 1950s has been unleashed in the form of the Russophobic hysteria being whipped up by the media. Out of sheer desperation, it appears as if a scheme has been set in motion by the so-called “deep state” to entrap and impeach Trump as a Russian collaborator in order to prevent any alliance between the two nations. Ironically, it is not Russian hackers or spies that are threatening the republic, it is covert British agents within the F.B.I. and the CIA and other intelligence agencies that pose the greatest danger to America. An assassination or even a coup is certainly possible.

And the growing possibility that the US might join Russia and China in the revolutionary One Belt, One Road infrastructure project has the British Empire going apoplectic. The British Empire is threatened with extinction, and they know it.

Given the inevitable crash of the Anglo-centered financial system, a system which even its most prominent proponent, Lord Rothschild, admits is in “uncharted waters,” it would appear that war —even if suicidal —is a risk worth taking since it is the only means by which London can possibly hope to prevent Trump from breaking free from British control and making America great again.

And according to Bible prophecy, the enemies of the republic will succeed.

Given the ignorance of the general population regarding the history and nature of the British Empire, and the fact that deception and misinformation (fake news)  is the empire’s modus operandi, the leadership of Jehovah’s Witnesses lack the wherewithal to discern London as the manifestation of The King of the North. That is why for the past 20 years the Watchtower hasn’t had one word to say about this fascinating prophecy.

In a speech Trump delivered on Saturday (Transcript) he made it clear that he intends to reverse the globalists’ scheme to destroy the nation-state system. After referring to the same nationalistic phenomenon called Brexit, Trump said:

“The nation state remains the best model for human happiness and the American nation remains the greatest symbol of liberty, of freedom and justice on the face of god’s earth. And now we have spirit like we’ve never had before. It’s now that we have our sacred duty and we have no choice and we want this choice to defend our country, to protect its values and to serve its great, great citizens. Erasing national borders does not make people safer. It undermines democracy and trade prosperity. We’re giving it away.”

It seems pretty clear that Trump is pushing back on the British Empire, what he called the “elites.” He is the first American president in quite awhile who is not subservient to the Crown.