Brexit and the Beast

Brexit and the Beast

QUESTION: What are your thoughts on the “Brexit”? Does this have anything to do with Bible prophecy?

ANSWER: Britain’s exit from the European Union seems to have taken everyone by surprise. Except it should be pointed out that it is not a done deal yet. The referendum may be nullified or overturned.

That said, whether the United Kingdom actually leaves the Union is irrelevant, as it seems that the first shot has been fired of what looks to be a revolt against Brussel’s autocratic rule over the 20-some nations comprising the EU. The Brexit referendum has caused a groundswell of popular uprising. For example, Denmark is now being swept up in the leave or remain issue. That is why the leaders of France and Germany hurriedly promised to reform what some refer to as Brussel’s dictatorship over Europe.

The Brexit has even emboldened people in far away Australia to dare to think of leaving the British Commonwealth.

As far as Bible prophecy goes, keep in mind that although the Watchtower has convinced Jehovah’s Witnesses that the prophecies in the seventh and eighth chapters of Daniel have been fulfilled, we may be sure that such is not the case. Consider the seventh chapter and the vision of the unusually terrible, ferocious wild beast with 10 horns and iron teeth and copper claws that is devouring and crushing the world.

Most significantly, a little horn emerges among the 10 and plucks out three of the 10 horns. The little horn then wages war against the holy ones and prevails. Here is what the angel said: “As for the ten horns, ten kings will rise up out of that kingdom; and still another one will rise up after them, and he will be different from the first ones, and he will humiliate three kings. He will speak words against the Most High, and he will continually harass the holy ones of the Supreme One.”

Britain’s supremacy was confirmed by the crushing victory over Napoléon of France in 1815 C.E. The “three kings” that Britain thus ‘humiliated’ were Spain, the Netherlands, and France.  As a result, Britain emerged as the world’s greatest colonial and commercial power. Yes, the “small” horn grew to become a world power! – Pay Attention to Daniel’s Prophecy, 1999

Embarrassingly, the Watchtower claims the three horns were plucked out long ago and it occurred not as a single incident, but stretched out over a span of a couple hundred years —beginning in 1588, when King Phillip’s Spanish Armada was defeated by the British. But the loss of a few dozen wooden sailing ships, most of which were wrecked by North Atlantic gales, was not the end of Spain. True, it marked the beginning of the slow rise of the British Empire to oceanic domination, which was finally capped with the defeat of the French navy in the Battle of Trafalgar in 1805; however, the three nations that were supposedly “plucked out” over several centuries —namely, Spain, Holland and France —are just as viable today as they were then. And not coincidently, those three nations are now an integral part of the European Union. (For a more detailed discussion of the prophecy read the article Spanish Armada or WWIII?)

Although during the heyday of the Victorian Empire London held supremacy over a large part of the world by means of its domination of the seas, establishing control over the continent of Europe was much more challenging. As a consequence the Empire has fomented conflict among European nations as a way of weakening rivals and potential rivals, just as it is presently orchestrating chaos throughout the Middle East and Africa. 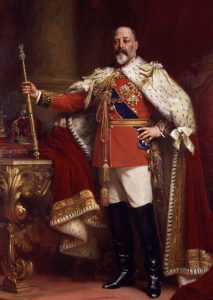 The forgotten history of pre-WWI, for example, reveals that King Edward VII for the most part single-handedly crafted the set of alliances that pitted the two great blocs of nations and empires against each other.

Although he did not live to see the end result of his machinations, history verifies that his goal of destroying Germany and the Austro-Hungarian and Ottoman Empires was accomplished by means of the conflagration known as the First World War, as well as setting the conditions that led to the Bolshevik Revolution that took down Czarist Russia.

After the Second World War the victors carved up Germany into East and West, with the East, along with Berlin, under Soviet domination. But when the USSR was dissolved and Germany was reunited the lords of London knew that the industrious Germans would soon return to dominance of the continent and perhaps beyond. In 1992, just a few months after the Union of Soviet Social Republics was disbanded, in order to establish some control over Germany the Empire foisted the Maastricht Treaty upon them, which was the first step towards the so-called European Union. The intent being to transfer sovereignty away from nations to a single government controlled by London’s bankers. (To be clear, many Euro banks are actually of British pedigree, such as Lord Rothschild’s InterAlpha Group of banks and even Germany’s Deutsche Bank PDF)

Now, though, the British monetary and financial system is disintegrating. The bailouts and negative interest rates, the quantitative easing have run their course. There is little that can be done now to disguise the insolvency of the Trans-Atlantic system, except the last resort of simply flooding the world with money that will lose value by the minute.

While the day-to-day traders and money-changers may not realize the jig is up, the handful of men who sit on top of the heap are no doubt aware of gravity of the moment. It is in their interest to control the timing of the inevitable collapse.

At the same time the BRICS nations are ascending. For example, China just announced that its AIIB is going to convert a half trillion of its US treasury reserves into physical investment in Eurasia.

Interestingly, against President Obama’s pleadings, Britain actually joined the AIIB, which is an overt rival to the Anglo-American-controlled World Bank and IMF. Some observers see this development as the beginning of the end of American economic dominance. As another sign of London’s move to ally with China Barclay’s Bank secretly sold their state of the art gold vault in London to the Chinese. The vault can store 2,000 tons of the precious metal.

(There is probably a secret London/Beijing connection due to the fact that Hong Kong was under British control for more than a century. When Hong Kong reverted to Chinese authority in 1999 the wealthy oligarchs who had been schooled in the British imperial system brought Beijing into London’s global financial arrangement. Quite likely there are secret society ties among the Chinese elite and the lords of London.)

Perfidious Albion, walking on a sea of blood after looting the continent.

So, on the one hand British foreign policy has become the driving force for the American military, which is actively seeking war with Russia and China, while in true form as perfidious Albion, London is quietly allying itself with China, obviously in order to control the new economic system that banker’s intend to put in place when they scuttle the Dollar/Euro/Yen system.

It may be, that, the Brexit is not a popular uprising at all, but is a clever ploy by the insiders to trigger a financial panic. Whether it detonates the implosion of the whole system remains to be seen. Time will tell.

That brings us back to the beast with 10 horns. Since the ascendency of the little horn and the plucking out of the three has most assuredly not taken place, it may well be that the three horns represent Britain, America and France. That’s right, although Great Britain has been home to the capitol city of the Empire for more than two centuries, the global elite have no loyalty to any particular nation or people.

The London traders and bankers have accomplished their purpose of plundering the nations. Now that the mechanism for doing so is itself bankrupt, the next phase of the scheme for world domination will be to crash the system. Then swoop in in the aftermath and lay claim on all physical assets. We have seen a fore gleam of this with little nations like Greece, which were swindled into massive indebtedness that has resulted in the bankers virtually owning the nation. The same can happen on a much larger scale. Governments, corporations and households are loaded with debt. And as the Bible says, the borrower becomes a slave of the lender.

The little horn? Since all nations are already members of the United Nations, an admittedly impotent institution, we might think of it as a placeholder.  It is most likely that the owners of the assets after the foreclosure of the system —the gold and oil and food —will transfer their ownership of nations to the authority of the United Nations, which will then become a form of global communism. After all, Jehovah’s judgment is that the nations be crushed by the tyrants of the nations.

With America and Europe dashed by tyranny, Jehovah’s Witnesses will come under ban. In that way the little horn will wage war on the holy ones of the Supreme One and prevail against them until Christ slays the beast.