Blessed is he who comes in Jehovah’s name

Blessed is he who comes in Jehovah’s name

Quite a bit is made of the fact that the Greek Scriptures, the so-called New Testament, does not  use God’s personal name, such as it appears in the Hebrew Scriptures thousands of times, most commonly translated as Jehovah.

However, even the most ancient Greek texts are copies, perhaps even copies of copies. The oldest fragments date from the early second century and most are much more recent. So, it cannot be definitively stated that the original writings of the apostles did not contain some form of the YHWH. Given the tendency of men to exclude God’s name it is most probable that copyists removed it.

On the other hand, while the YHWH does not appear in the available Greek manuscripts it was used nearly 7,000 times in the Hebrew texts. In spite of that, most popular versions of the Bible omit the personal name of God entirely. Some ignorant persons claim that God has many names. That is simply not true. Lord, God, Savior, Almighty, and Most High are merely descriptive titles, not his personal name. God says quite simply: “I am Jehovah. That is my name.” –Isaiah 42:8

No doubt the underlying reason the popular translations have erased all trace of God’s name is to lend support to the false teaching that Jesus is God. Again, in that regard, ignorant persons claim that Jesus is Jehovah —that he changed his name.

But according to Jesus himself, he came in the name of his Father. Jesus once said: “I do not accept glory from men, but I well know that you do not have the love of God in you. I have come in the name of my Father, but you do not receive me. If someone else came in his own name, you would receive that one.” – John 5:41-43

The historical evidence reveals that several hundred years prior to Jesus’ coming the Jewish priests promoted the idea that the name of God was too holy to be pronounced. Although the name appeared in their holy books they did not verbally utter it. But Jesus was not bound by Jewish traditions, which he demonstrated over and over again, such as in connection with his performing miracles on the Sabbath.

Furthermore, Jesus stated that the miraculous works he was doing were also done in the name of his Father. For example, at John 10:25-26 Jesus said: “The works that I am doing in my Father’s name, these bear witness about me. But you do not believe, because you are not my sheep.”

Because the majority of the Jews rejected Jesus and did not accept his having come in the name of his Father, they were rejecting Jehovah as their God. But according to Jesus the only way he would acknowledge individuals as being his sheep is if they confessed the name of God, something that was taboo for a Jew to do.

In pronouncing doom upon Jerusalem Jesus quoted from the Psalm, saying: “Jerusalem, Jerusalem, the killer of the prophets and stoner of those sent to her—how often I wanted to gather your children together the way a hen gathers her chicks under her wings! But you did not want it. Look! Your house is abandoned to you. For I say to you, you will by no means see me from now until you say, ‘Blessed is the one who comes in Jehovah’s name!’” Matthew 23:37-39

True, modern versions of the gospel of Matthew do not use the name of God. But the inescapable fact is, the Psalm which Christ was quoting contains the abbreviated name of God.  Besides, it is nonsensical to suppose Jesus would require believers to confess the name of a nameless lord. So, there really is no way around it. Christ’s true disciples must confess that he came in the name of Jehovah. Those who refuse to acknowledge that truth —or who insist that God’s name must be rendered by the unpronounceable YHWH —betray themselves to be none of Christ’s sheep.

Since Jesus came in the name of Jehovah when he appeared on earth 2,000 years ago and his last instructions to his disciples before he returned to heaven was to baptize in the name of the Father and Son, we may expect that Jesus will return similarly —in the name of his Father.

Most noteworthy is the fact that those who are ultimately found worthy when Christ returns will have the name of Jesus’ God written upon them. In other words, they will be the exclusive property of Jehovah. Here is what Jesus said to the congregation of the Philadelphians: “The one who conquers—I will make him a pillar in the temple of my God, and he will by no means go out from it anymore, and I will write upon him the name of my God and the name of the city of my God, the New Jerusalem that descends out of heaven from my God, and my own new name. Let the one who has an ear hear what the spirit says to the congregations.” —Revelation 3:12-13

Elsewhere in Revelation Jesus confirms that the name of his God will be most prominent in connection with the 144,000. Of these Revelation 14:1 states: “Then I saw, and look! the Lamb standing on Mount Zion, and with him 144,000 who have his name and the name of his Father written on their foreheads.”

Of course, the personal names of God and the Lamb will not literally be written upon anyone’s forehead. That is merely symbolism to express the fact that not only are the 144,000 the special property of God, they will be intimately associated with God’s name.

So, while the leaders of the masses have gone to great lengths to bury God’s name, the eventual kings of the world will rule in the name of Jehovah and destroy all of God’s enemies.

I guess this helps even the score from the millions of Muslims the "Christians" slaughtered going back to the first crusade.

It's the latest attack against Christians by Muslim extremists...

Have you cracked a smile and laughed today? Here...

.@b_ru_ru's adorable cats ring a bell every time they want a treat.

"This year or next" ought to coincide with the impending financial blowout, war, anarchy, and all that

This might help us get some idea of the extent of the metaphoric locust plague in Joel, described by Jehovah as his military force, that is destined to devour the world 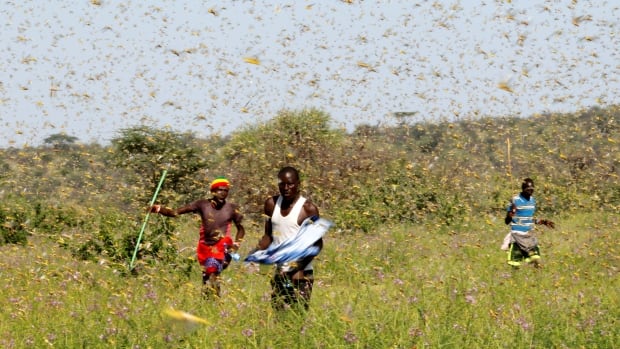 Billions of locusts have been tearing across East Africa, decimating crops in their path.