To Babylon You Will Come

To Babylon You Will Come

Babylon was the third empire of Bible prophecy. It came into the dominant position after overthrowing the Assyrian capital of Nineveh around 632 B.C.E. About seven years later the combined armies of Assyria and Egypt were decisively defeated at the battle of Carchemish, not far from the modern Syrian city of Aleppo that has been in the news of late. King Nebuchadnezzar’s victory over the first two empires was a strategic turning point that opened the way for the Chaldean juggernaut to flood southward into Canaan.

While historians confirm these events that are recorded in the Bible, they do not appreciate that Nebuchadnezzar was acting as Jehovah’s official punishing agent. Before Babylon ever rose to power the prophets foretold that all the treasurers of Jerusalem would be plundered and the Jews would be taken to Babylon until they paid off their debt to Jehovah —the God of Israel.

Besides that, God used Babylon to annihilate numerous nations such as Moab, Ammon, Edom, and the offshore city of Tyre and even the land of Egypt itself. In fact, Babylon was said to have destroyed the whole earth. Babylon was described as Jehovah’s hammer for smashing all the nations. Hyperbole? No. Rather, a prophetic pattern of things to come.

In time though —70 years to be precise —Jehovah judged Babylon too.  Somehow the invaders engineered  the diversion of the Euphrates River, allowing the combined armies of the Medes and Persians to wade across under cover of darkness and into the impregnable fortress through the opened gates facing the river. Thus, in one night, October 2, 539 B.C.E., mighty Babylon was toppled and her king killed.

As if to emphasize that the overthrow of the kingdom of the Chaldeans was an act of God, it was on that very night that a captive Judean prince by the name of Daniel interpreted the miraculously appearing handwriting on the wall announcing the end of Babylon on that very night.

As foretold in Isaiah 200 years before, Cyrus, whom Jehovah called “my anointed one” —literally, my messiah —released the Jews from captivity and allowed them to return to their homeland and rebuild Jerusalem and the temple. 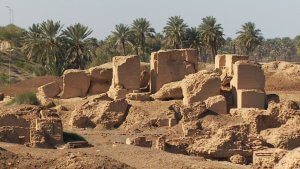 Although Iraq has undertaken to build a full-size replica of the once mighty citadel on the Euphrates as a tourist destination, the real Babylon remains nothing more than a mound of ruin —just as Jehovah foretold.

However, far more significant than the literal ancient city, is the role that the empire of the Chaldeans once played on the world stage that casts a far-reaching prophetic shadow. And what is that? Babylon typifies the last kingdom —the eighth king of Revelation that is destined to rule the world for a prophetic one hour. The eighth king, in fact, will fulfill all the prophecies concerning the final confrontation between the nations and the Kingdom of Christ.

The prophecy of Habakkuk portrays the kingdom of the Chaldeans as being appointed by God to execute judgment, bringing God’s punishment upon all the nations. However, although cast in the ancient setting of horses, archers and cavalry, the prophecy is set for fulfillment at a future date. That is why God commanded his prophet to “Write down the vision, and inscribe it clearly on tablets, so that the one reading aloud from it may do so easily. For the vision is yet for its appointed time, and it is rushing toward its end, and it will not lie. Even if it should delay, keep in expectation of it! For it will without fail come true. It will not be late!”

While the Watchtower rightly claims that the vision is yet for an appointed time in the future, contradictorily the prophets of Bethel suppose that God’s authorized punishing agent has already begun his work. According to the February 1, 2000, Watchtower, the modern Chaldean is a hodgepodge of various warmongering nations and even drug dealers and swindlers, who have oppressed and defrauded the people of the world during the past century.

At the same time they also contradictorily assert that Babylon’s conquest of Judah foreshadows the future destruction of Babylon the Great; this, in spite of the fact that the Chaldean attack upon “Judah” ultimately provokes God’s wrath, as Habakkuk foretells: “You marched through the earth with indignation. You trampled the nations in anger. You went out for the salvation of your people, to save your anointed one. You crushed the leader of the house of the wicked. It was exposed from the foundation to the top. You pierced the head of his warriors with his own weapons when they stormed out to scatter me.”

The true interpretation of the prophecy of Habakkuk is presented in detail in the book Jehovah Himself Has Become King. The second edition (2010) is available as a website, including a complete audio version. The 2010 edition is also available as a website in French and Spanish and as an illustrated e-book on iTunes. (Don’t buy Apple’s unauthorized e-book. The illustrated edition is free) The Final Edition (2016) is available as a PDF for download and as a soft bound book for purchase on Amazon.

That Babylon is a type of the last king is evident from the fact that the 13th chapter of Isaiah also presents Babylon as God’s appointed avenger that brings ruin to the entire inhabited earth.

However, Isaiah’s prophecy reveals that Babylon’s destructive conquest of the world is an immediate precursor to the day of Jehovah. Here is what Jehovah has said:  “I have issued the command to those whom I have appointed. I have summoned my warriors to express my anger, my proudly exultant ones. Listen! A crowd in the mountains; it sounds like a numerous people! Listen! The uproar of kingdoms, of nations gathered together! Jehovah of armies is mustering the army for war. They are coming from a distant land, from the extremity of the heavens, Jehovah and the weapons of his wrath, to bring ruin to all the earth. Wail, for the day of Jehovah is near! It will come as a destruction from the Almighty. That is why all hands will go limp, and every man’s heart will melt with fear. The people are panic-stricken. They are seized with convulsions and pain, like a woman in labor. They look at one another in horror, with faces inflamed by anguish. Look! The day of Jehovah is coming, cruel both with fury and with burning anger, to make the land an object of horror, and to annihilate the land’s sinners from it. For the stars of the heavens and their constellations will not give off their light; the sun will be dark when it rises, and the moon will not shed its light.”

The overthrow of antitypical Babylon will be accomplished by Jehovah’s anointed one, Christ. It will result in the end of Satan’s reign over the nations. That is why in the 14th chapter of Isaiah the end of Babylon brings peace and quiet to the earth. And that is why all the other kings and their empires that have come and gone are said to be laying in memorial tombs, not so the shining one of Babylon, who sought to supplant God’s throne. He receives no honored burial. Isaiah says of him: “All other kings of the nations, yes, all of them, lie down in glory, each one in his own tomb. But you are discarded without a grave, like a detested sprout, clothed with the slain who were stabbed with the sword, who go down to the stones of a pit, like a carcass trampled underfoot. You will not join them in a grave, for you destroyed your own land, you killed your own people. The offspring of evildoers will never again be named.”

The inglorious end of Babylon harmonizes with what is revealed in Revelation; namely, that the last king will suffer a most ignominious death, being plunged into the lake of fire, where the smoke of his torment will forever ascend and the carcasses of his supporters will serve as a great feast for the birds of heaven.

Certainly Babylon, Assyria, Egypt, Persia, Greece, Rome and the present Anglo-American duo, all had/have their religious consorts to sanctify their wars and conquests, so too, the eighth king is depicted as having immoral relations with the international prostitute known as Babylon the Great. Most assuredly the eighth and final king will be a world government to whom all the kings of the earth will give their authority and more than likely Babylon the Great will be manifest as a one-world, pantheistic religion.

Contrary to the interpretations imposed upon Jehovah’s Witnesses by the Watchtower, such as the notion that the Bible Students were released from spiritual captivity to Babylon the Great back in 1919, not only has the last kingdom not come on the scene yet with its brazen harlot mount, neither have God’s people gone into captivity to the greater Babylon.

Since coming online in 2002 I have pointed forward to the coming judgment of the house of God. Through mass mailings of open letters, brochures and the aforementioned book, the leadership of Jehovah’s Witnesses have been put on notice regarding Jehovah’s coming judgment and the reasons for it. Although I am not privy to the details of how things will unfold exactly, neither did the prophets of old understand how God’s words would be fulfilled. They merely made announcement in advance, as have I.

In response the Watchtower has doubled down and reassured Jehovah’s Witnesses that Christ has already come with the fire of the refiner and the lye of a laundryman. There are no issues that God could possibly have with them. They are as white as the driven snow.

In this respect there is an interesting parallel with what took place immediately prior to Babylon’s conquest of Judah. For many years Jeremiah put the Jews on notice that Jehovah’s judgment was coming. Pashhur, the son of a priest and the leading commissioner over the house of Jehovah in Jerusalem, struck Jeremiah and had him put in stocks. In response, however, Jeremiah prophesied, changing Pashhur’s name to “Fright All Around” to underscore the certainty of the frightening tempest Jehovah was sure to bring upon them. Jeremiah went on to say:  “And as for you, O Pashhur, and all the inhabitants of your house, you will go into captivity; and to Babylon you will come and there you will die and there you yourself will be buried with all your lovers, because you have prophesied to them in falsehood.’”

Like Pashhur, the leading commissioners of Bethel —“Bethel” being the Hebrew word for the house of God —have prophesied in sheer falsehood. The Governing Body suppose they can control Jehovah’s judgment by simply writing their own story with a false stylus. How wrong they are! To Babylon they will come!

How will that come about? That will be a topic for a future article.