Babylon as the Last Kingdom

Babylon as the Last Kingdom

For your sakes I will send to Babylon and bring down all the bars of the gates.—Isa. 43:14.

In line with that prophecy, a world-shaking event happened one night early in October 539 B.C.E. While Babylon’s king and his nobles were drinking wine from holy vessels captured from Jerusalem’s temple and were praising their man-made gods, the armies of Media and Persia conquered Babylon. In 538 or 537 B.C.E., Babylon’s conqueror, Cyrus, commanded the Jews to return and rebuild God’s temple in Jerusalem. All of this was foretold by Isaiah, including Jehovah’s promise that he would provide for and protect his repentant people as they returned to Jerusalem. God called them “the people whom I formed for myself so that they might declare my praise.” Once these former exiles had returned and rebuilt Jehovah’s temple in Jerusalem, they became witnesses to the fact that Jehovah, the only true God, always fulfills his word.

The sudden overthrow of mighty Babylon in one night shocked the people of the ancient world. Babylon was the center of a great empire that dominated much of the known world. The Chaldeans had conquered both Assyria and Egypt, who were its main rivals. Also the island city of Tyre was looted and destroyed, which was a wealthy seafaring center —similar to the city of London in more recent times. And of course Nebuchadnezzar laid siege to and conquered the prized Judean city of Jerusalem, the place where Jehovah had caused his name to reside in the ancient world.

Unknown to the babylonians and surrounding nations, though, God actually sanctioned the destruction of the city and temple associated with his name. Jehovah did so in order to punish the Jews for their having treated his name disrespectfully and rebelling against him.

Although Jehovah faithfully sent various prophets to his people —most notably, Isaiah and Jeremiah, the Jews refused to listen. The priests and prophets and princes assured the people that Jehovah would never abandon the city of Jerusalem. But, alas, he did.

However, in order to demonstrate his power and the fact that the Chaldeans were merely an instrument in his hand, Jehovah inspired the very same prophets who foretold the destruction of Jerusalem to forecast Babylon’s sudden overthrow and the liberation of the sons of Israel from their captivity.

Jehovah’s Witnesses believe that the archetype of ancient Babylon fell in 1919 when J.F. Rutherford and seven other Watchtower officers were released from prison.

Apparently, there were some influential clergymen who conspired with government officials to try to shut down the Watchtower during the First World War. The fall of Babylon the Great is explained as the inability of false religion to any longer exercise control over Jehovah’s people. But that is simply not true. 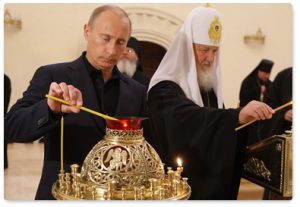 Just this week Vladimir Putin signed into law a bill that prevents any religion from preaching without permission. While the new law is ostensibly intended to combat terrorism and it encompasses all types of groups like the Hare Krishna and the Church of Scientology and various evangelical sects, obviously it is aimed at preventing Jehovah’s Witnesses from preaching door-to-door and displaying their information stands in public places. Russia had already blocked jw.org from the Internet in Russia and banned Jehovah’s Witnesses in the city of Moscow, but now the entire Watchtower-sponsored ministry is illegal throughout the vast Russian Federation. And no doubt the clergy of the Russian Orthodox Church, of which Putin is a staunch supporter, is behind the ban.

Jehovah’s Witnesses are banned in many countries, so what just took place in Russia is not unique. But the point is, how can Jehovah’s Witnesses make the claim that Babylon the Great can no longer restrain Christians? Even during the First World War the work of the Bible Students was not banned as is now the case in Russia. The day’s verse from Isaiah states that God will “bring down all the bars of the gates,” not just a few.

The reason none of what the Watchtower teaches with regards to the fulfillment of prophecy makes any sense is because it is not true and cannot be harmonized with the Bible or reality.

According to the Watchtower there are actually two symbolic seven-headed wild beasts. The scarlet-colored beast that emerges from the abyss, from a deathlike state, is different than the beast that suffers a mortal head wound and then recovers. But that is totally illogical. The beast from the abyss symbolizes the political system after it recovers from the mortal head wound, at which point the entire seven-headed beast becomes the eighth king. The reason the eighth king is symbolized by the entire monstrosity and not simply by an eighth head is because the last kingdom will be a world government that will be comprised off all the world powers then in existence.

While the eighth king will temporarily have the harlot called Babylon the Great as a mount, the last kingdom itself will be the antitype of the ruthless Babylonian Empire. Babylon was the killer of nations and presumed to totally dominate the kingdom of Jehovah, as if ascending above the very stars of God. That Babylon typifies the last king is evident from the 14th chapter of Isaiah that describes all the other fallen kings of the nations as having received an honorable burial —meaning that history remembers them. Not so Babylon – or at least of what Babylon represents. Isaiah says of him: “All other kings of the nations, yes, all of them, lie down in glory, each one in his own tomb. But you are discarded without a grave, like a detested sprout, clothed with the slain who were stabbed with the sword, who go down to the stones of a pit, like a carcass trampled underfoot.”

The reason “Babylon” is described as being trampled down like a carcass is because that is the end that awaits the last king. As Revelation says that the wild beast will be caught and all of its supporters will feed the birds with their flesh. No honorable burial!