Are you ready to judge them?

Are you ready to judge them?

Ezekiel was qualified to judge them. He being a Hebrew and a son of a priest, Ezekiel would have been knowledgable of the history of the nation and the laws that God gave them —laws that the Israelites repeatedly ignored and flagrantly violated. As God went on to say: “Make them know the detestable things that their forefathers did. Tell them, ‘This is what the Sovereign Lord Jehovah says: “In the day I chose Israel, I also swore to the offspring of the house of Jacob, and I made myself known to them in the land of Egypt.’”

Like Ezekiel, I have judged the leadership of the Watchtower. Having been part of the organization most of my adult life, I have taken up a deep study of the Scriptures and am thoroughly familiar with the history and teachings of Jehovah’s Witnesses —as well as the treachery of the higher-ups.

I have judged them based upon their own teachings. For example, the Watchtower has thoroughly condemned Christendom for their political involvement —particularly as regards the churches’ support of the United Nations. The Watchtower has judged the clergy as being worthy of everlasting death. So, when it came to light that the Watchtower had become involved in a secret partnership with the UN, I judged the Governing Body as hypocrites who had betrayed Jehovah —using their own judgments that they had leveled against Christendom. And make no mistake, that is exactly what Jehovah is going to do to them: “I will treat them according to their ways, and I will judge them as they have judged. And they will have to know that I am Jehovah.”

As Jehovah made himself known to the Israelites in Egypt, Jehovah has walked among Jehovah’s Witnesses by his spirit. He has taught us through Christ and revealed himself, at least to an extent, enough so that we may know his will and character —his judicial decisions.

Sadly, Jehovah’s Witnesses have defiled themselves the same way the Jews did; through their organizational idolatry, by a form of child sacrifice, by political compromise, promoting a false vision, and many other things.

About 20 years ago when I initially tried to reason with the Governing Body, I spoke to a member on the phone. He became indignant that one of the rank and file would have the temerity to question the truthfulness of the teachings of the Governing Body. He then stated that if Jehovah wanted them to know anything he would reveal it to them directly and not through some outsider —some wanna-be anointed, or whatever.

I noticed at the 2018 Annual Meeting Governing Body member, Anthony Morris, stated several times that they decided who the king of the north was only after much prayer. And in this Pure Worship publication, the Governing Body reiterates that the “adjustments” they have put forth was only after much “prayerful thought.” They are implying that God answered their prayers and has channeled to them the truth that is otherwise unavailable to other less exalted men. But one would think that given their years of experience and the collective input of others that after “prayerful thought” they would at least get it right. Perhaps, though, Jehovah is not answering their requests? That was the case in ancient Israel. After expressing his disgust over their idolatry, God stated: “‘Should I at the same time respond to your inquiry, O house of Israel? As surely as I am alive,’ declares the Sovereign Lord Jehovah, ‘I will not respond to your inquiry. And what you have in mind when you say, ‘Let us become like the nations, like the families of the other lands, who worship wood and stone,’ it will never happen.’” —Ezekiel 20:31-32

Jehovah was called the God of Israel. That, however, did not mean he would allow himself to be degraded or blasphemed by mere humans. God’s dignity is above the heavens. Humans can only have dealings with him on his terms and conditions.

In many respects, the leadership of the Watchtower has presumed upon God. Due to their 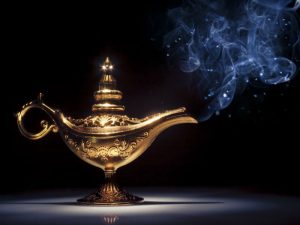 having become a successful publishing enterprise, like the other businesses of this world, they have relegated Jehovah to corporate mascot status. God’s sacred name has been initialized and incorporated into their patented JW.org corporate logo. They have presumed that God is obligated to always answer them, like some sort of genie that pops out of a magic lamp when rubbed vigorously.

Given the massive fraud the Watchtower has perpetuated with 1914 and previously mentioned evils and errors —ought Jehovah respond to their prayers? Is Jehovah obligated to do so? The fact that after all these years the Governing Body is still waiting for Heaven to reveal to them what I have known for years indicates that God is not responding to them.

The Watchtower has loudly proclaimed that Jehovah became king in 1914 —through Jesus, of course. However, God’s dealings with ancient Israel indicates that God’s kingship involves subjecting his people to the fire. Making them pass under his shepherd’s staff is an allusion to the work of a literal shepherd who would use his staff to separate his sheep one from another as they filed past, directing one this way and another that way. Or, a shepherd may have used his staff to separate the sheep from the goats.

Jesus told a story about an enemy who oversewed a wheat field with weeds. When his apostles asked him to explain its meaning Jesus said that the reapers are angels. During the harvest, which is a conclusion of a system of things, the angels will collect all of the weeds and bundle them up and pitch them into the fire. The Governing Body claims the angels went into action in 1914 and all of the false Christians of Christendom were bundled up and the wheat, the true sons of the Kingdom, were distinguished 100 years ago.

Apparently very few of Jehovah’s Witnesses have ever realized how absolutely absurd the Watchtower’s teaching is. What the Watchtower is saying is that even though the Bible Students were already separate and distinct as a sect, God condemned every person of Christendom to everlasting death, represented by their weeping and gnashing of their teeth. More preposterous, although that entire generation of weedy Christians died off naturally anyway, apparently the angelic reapers continually bundle up millions of weeds as they pop up year after year, after year. And despite this century-long weed-pulling and bundling project the bundled weeds are yet to be thrown into the fire. And year after year the Watchtower continues to babble this nonsense. In fact, they couldn’t resist from mentioning it on their Pure Worship publication:

As Jesus had foretold in his illustration of the wheat and the weeds, it had long been impossible to distinguish wheat from weeds, genuine anointed Christians from impostors. Now, though, the harvest season arrived in 1914, and the distinction was clear. For decades leading up to 1914, faithful Bible Students had been exposing the gross errors of Christendom and were beginning to separate themselves from that corrupt organization. It was Jehovah’s time to restore them fully. So in early 1919, just a few years into “the harvest season,” God’s people were set completely free from captivity in Babylon the Great. The exile was over! (Page 105)

The fact is, it is still impossible to distinguish genuine anointed Christians from imposters. Only Jehovah knows who belong to him. Just like the superfine apostles had disguised themselves as ministers of righteousness and their fraud went undetected by the Corinthians, the weeds are very much flourishing among Jehovah’s Witnesses. The Second Coming of Christ will initiate the harvest and the rebels will be cleaned out. Or as Jesus said of the powerful, angelic harvesters: “And they will collect out from his Kingdom all things that cause stumbling and people who practice lawlessness, and they will pitch them into the fiery furnace. There is where their weeping and the gnashing of their teeth will be. At that time the righteous ones will shine as brightly as the sun in the Kingdom of their Father. Let the one who has ears listen.”

I have judged them. Rather, I have made known to them Jehovah’s judgments. They have refused to listen. They keep praying. But evidently, God is not listening.