Let everyone calling on the name of Jehovah renounce unrighteousness.—2 Tim. 2:19.

No text in the Hebrew Scriptures matches Paul’s quote. So, what was the apostle referring to when he said the above? Immediately preceding this statement, Paul quoted from Numbers chapter 16, which relates the account of Korah’s rebellion. The Bible says that Dathan and Abiram, sons of Eliab, joined Korah as leaders of the rebellion against Moses and Aaron.  The account reads: “Jehovah then said to Moses: ‘Speak to the assembly and tell them, “Get away from around the tents of Korah, Dathan, and Abiram!”’” Jehovah then put to death all who had rebelled. Conversely, loyal worshippers—who by moving away renounced unrighteousness—were preserved alive. It is possible, then, that Paul was referring to the account at Numbers 16:5, 23-27. Such a conclusion would be in harmony with Paul’s words: “Jehovah knows those who belong to him.”

The article from where the day’s text is taken advises Jehovah’s Witnesses not to engage “apostates” in anyway, specifically mentioning avoiding commenting on their blogs. (According to the Watchtower’s criteria e-Watchman is not an apostate.)

But in the account in Numbers regarding the rebellion instigated by Korah Jehovah required that persons take a deliberate action to separate themselves from the tents of the rebels. That is because those wicked men were in the midst of the Israelite camp. They were not outsiders who had gone out from among them. This is a very important distinction.

As it stands presently “apostates” are easily avoided and ignored. As depicted in the Watchtower article, a small faction of ex JW’s might picket a convention. And of course, there are numerous books and blogs published by ex-Jehovah’s Witnesses. And sadly, they have overturned the faith of many. But, obviously, they do not have any voice within the organization. In order to be influenced by them Jehovah’s Witnesses must seek them out in some fashion.

The reason I point out this obvious fact is because the account concerning the rebellion of Korah does not really fit the way the Watchtower would have you believe. Korah was a very prominent man within the camp. Along with 250 other Israelite chieftains of the assembly, who were “chosen ones of the congregation, prominent men,” they challenged Moses’ authority and apparently wanted to take over the priesthood. That is why Moses told them to appear with their fire holders and incense before the entrance of the tent of meeting and Jehovah would choose who was holy among them.

The following day  “Jehovah’s glory appeared to all the assembly.” That is when God commanded the Israelites to get away from the tents of the wicked. The ground then opened up and swallowed them down alive! The camp fled, screaming in terror. As if to put an exclamation point on it: “Then a fire came out from Jehovah and consumed the 250 men offering the incense.”

The account in Numbers foreshadows the ultimate separation of the faithful slave and the evil slaves at the coming of Christ. That is when the chosen ones will be distinguished from the evil ones. The appearance of Jehovah in glory signifies the glorious presence of Christ. Then the evil ones who are “despising authority, and speaking abusively of glorious ones” will become apparent. And the apostate man of lawlessness, who will by then have seated himself in the temple of God, will be exposed as a satanic fraud and destroyed.

To be sure, while the mystery of this lawlessness is already at work, as Paul stated, and has been exhibited in various ways, such as the Watchtower’s secret partnership with the United Nations, the apostasy that will come first will immediately precede the day of Jehovah. We may expect that to become manifest during the chaos to come.

Then, those calling upon the name of Jehovah will be required to renounce the unrighteousness of the Watchtower and separate themselves from the doomed organization, which will become an outright opposer of the greater Moses during his authentic parousia. 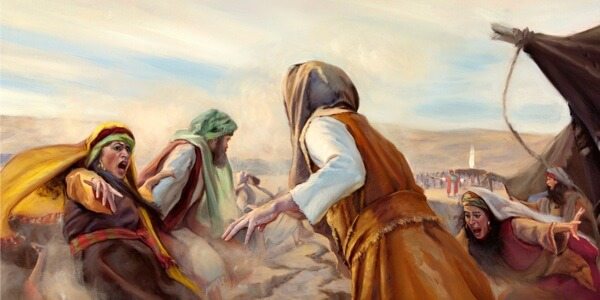