And my own people have loved it that way

And my own people have loved it that way

This is the final segment in the July 2022 Watchtower Review series.

During the pandemic, we also received clear direction about how to hold congregation meetings and engage in the preaching work. Almost overnight, we began attending Christian meetings, assemblies, and conventions by means of videoconferencing tools. We also began witnessing almost entirely by letter and telephone. Jehovah blessed our efforts. Many branches have reported notable increases in the number of publishers. In fact, many have had encouraging experiences during this time. —See the box “ Jehovah Blesses Our Preaching.”

There is no question that the Watchtower provided a very smooth transition from a very visible public presence to no presence at all. However, Jesus has already provided clear direction on how to engage in the preaching work. It is recorded in the 10th chapter of the Bible book of Luke: “After these things the Lord designated 70 others and sent them out by twos ahead of him into every city and place where he himself was to go. Then he said to them: ‘Yes, the harvest is great, but the workers are few. Therefore, beg the Master of the harvest to send out workers into his harvest. Go! Look! I am sending you out as lambs in among wolves. Do not carry a money bag or a food pouch or sandals, and do not greet anyone along the road. Wherever you enter into a house, say first: ‘May this house have peace.’ And if a friend of peace is there, your peace will rest upon him. But if there is not, it will return to you.”’

For a long time, some who pretended to know the Bible claimed that the first-century Christians did not go out preaching house-to-house. That is simply not true. Jesus personally instructed his original disciples to go from village to village, visiting each home. And if the householder was a friend of peace Jesus instructed his disciples to enter that home and teach them.

The International Bible Students were known for public preaching too, although there was no organized door-to-door witnessing back then. During the 30s JW’s used sound cars and placards to advertise Rutherford’s public addresses and radio sermons. After WWII the Watchtower really focused on training Jehovah’s Witnesses to be real ministers, capable of actually engaging a person and teaching them. The door-to-door ministry, as well as street-corner witnessing, has been the Watchtower’s hallmark ever since—at least up until the Governing Body shut it down. Even now, as virtually everything is back to normal, except for the few virtue-signaling holdouts and extremely vulnerable people who wear masks everywhere, Jehovah’s Witnesses are nowhere to be seen in public.

The Governing Body claim it is just too risky and foolhardy to venture out on the street, even though there is not a shred of proof that anyone has ever contracted the virus out of doors in the fresh air and sanitizing sunshine. Those kings of Warwick, cloistered in their granite palace in the secluded woods of New York, seem to have lost the spirit of the truth.

The founder of numerous congregations in the first century, the apostle Paul, once enumerated all of the perils he faced in order to preach the good news. He did so because the “superfine apostles” who were overseeing the Corinthian congregation criticized him and wanted to have all the glory of being apostles. 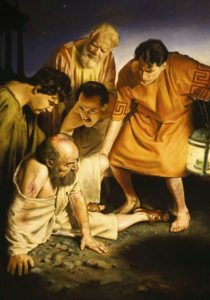 Can we imagine the intrepid apostle confining himself to his tent in a remote wilderness because he considered it foolhardy and too dangerous to expose himself to a microbe that might cause him to get severe flu-like symptoms and only has a survivability rate of 99%?

In warfare, the winning strategy is to convince your opponent not to fight. If a fight is unavoidable the next best strategy is to persuade the other side to surrender. In the ongoing war in Ukraine, the two sides are using two completely different tactics. It has been reported that the Nazi battalions embedded in the national army of Ukraine are torturing captured Russian soldiers. All Russian officers are summarily executed. On the other hand, the Russians are persuading Ukrainian soldiers to surrender promising to treat them well, even giving the wounded warriors prompt hospital treatment. Obviously, the Russians offer the best inducement to surrender. Why would any soldier allow themselves to be captured if they knew they were going to be killed anyway? 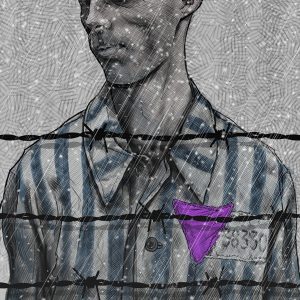 In a sense, the Russian strategy has been applied to Jehovah’s Witnesses. By contrast, during WW2 Hitler vowed to exterminate the Bible worms, as he called JWs. If they were captured JWs knew they were certain to go to prison and possibly be sentenced to a concentration camp or be executed outright; nevertheless, Jehovah’s Witnesses defied the Nazi tyrants and engaged in leaflet distribution campaigns that drove Hitler and his Gestapo mad. What faith and courage they showed! You can read their experiences in the 1974 Yearbook of Jehovah’s Witnesses.

Now, though, with the menacing microbes floating about, the Governing Body has simply ordered Jehovah’s Witnesses to confine themselves to home and they gladly obey, even though doing so means defying Christ and repudiating everything that Christians have always stood for. Jehovah’s Witnesses have surrendered without protest because the enemy within claims to speak for Christ. And of course, they are well treated by their spiritual captors.

Those who used to beat the street through heat, rain, and snow are happy to be confined to home (or Starbucks) stuffing envelopes, and making robot-like calls with their smartphones. And the Governing Body boasts of an increase in publishers?

If the Watchtower considers envelope lickers and stamp stickers to be publishers, like the maddened apostle might say, I have outdone them all! Over the course of the past 20 years, I have spent well over 10 thousand dollars on postage, stationery, ink, and the like, trying to convey an urgent Bible-based message to those who are unwilling to hear it. If they are publishers, I am one more outstandingly!!!

Some may have felt that the organization was being overly cautious with regard to the pandemic. But time and time again, it became evident that the direction we received was well-founded. (Matt. 11:19) And as we meditate on the loving way in which Jesus is leading his people, we are assured that no matter what tomorrow may bring, Jehovah and his beloved Son will be with us.

Pardon my repetition, but back in the summer of 2020 with the presidential campaign in the United States in full swing a small army of Trump supporters went door-to-door to enroll voters and try to drum up support for their candidate. They contacted some half-million householders per week, which is roughly comparable to what Jehovah’s Witnesses might have done on an average workweek. (Not weekend) There were no reports that the volunteers were responsible for some super-spreader event or that anyone even became ill with Covid. Mind you, the Summer of 2020 was before the vaccination campaign began.

By the next year though, in the summer of 2021, in a series of Updates on JW Broadcast, the GB vigorously promoted vaccinations and threatened all dissenters with judicial action. In spite of their demands that all of Jehovah’s Witnesses follow Christ’s direction and allow themselves to be injected with the experimental gene therapy, if the mRNA vaccinations are a provision from Jehovah, as they imply, and since God would never recommend a cure that is useless or even deadly, why then is it still too dangerous and foolhardy for JWs to venture out of their homes to preach?

Something is seriously wrong. The direction Jehovah’s Witnesses have received has not come from Christ. Jesus would never countermand himself. Those who claim Christ is directing everything speak by their own authority—not Christ’s. The “direction” coming from Warwick has proven beyond any doubt that Jehovah’s Witnesses are being gaslighted by their revered Governing Body.

Sadly, the scripture is true: “Something appalling and horrible has occurred in the land: The prophets prophesy lies, and the priests dominate by their own authority. And my own people love it that way. But what will you do when the end comes?” — Jeremiah 5:30-31