Woe for the earth and for the sea, because the Devil has come down to you, having great anger, knowing that he has a short period of time.—Rev. 12:12.

In 1914, war broke out between nations of Europe—a war that spread and engulfed the whole world. By the time it ended in 1918, terrible food shortages had been experienced and there was a flu epidemic in which more people died than were killed in the war. Thus “the sign” that Jesus had given to identify his invisible presence as earth’s new King started to be fulfilled. Ample evidence points to the year 1914 as the time when “a crown was given” to the Lord Jesus Christ. He “went out conquering and to complete his conquest.”  He cleansed the heavens in a war against Satan and his demons, who were hurled down to the vicinity of the earth. Ever since, mankind has experienced the truthfulness of the inspired words of today’s text.

In order for lies and falsehoods to have their desired effect they have to be repeated often and confidently, in a matter-of-fact way. Thus, trinitarians often make the unfounded claim that Jesus is God. Evolutionists no longer even refer to the theory of evolution —it is a fact! Here in the United States the mainstream media regularly make the claim that Russia invaded Ukraine and Crimea, and similar falsehoods. And the Watchtower regularly makes statements regarding Jesus having become king in 1914 and Satan being cast down, such as in today’s daily text.

The definition of delusion is a fixed false belief that is resistant to reason or confrontation with actual fact. That certainly describes the condition of Jehovah’s Witnesses as regards the whole 1914 rigamarole.

Consider a few facts which Jehovah’s Witnesses cannot accept. Around 1914 the population was approximately one billion. Approximately  17 million were slaughtered from 1914-1918. A few million more died from famines. And the estimates for those killed by the Spanish Flu run as high as 50 million —taking the combined death toll to roughly 70 million.

The unsealing of the seven seals of the symbolic scroll of God’s judgments unleashes the horses of war, famine and pestilence, which are given authority over a fourth part of the earth. That certainly seems to indicate that a very large percentage of earth’s population will be impacted. But 70 million is nowhere near a fourth of one billion. It is 7%. And since 1914 the population of earth has exploded and now stands at 7.4 billion. How can there be a population explosion at the same time the world is stalked by the horsemen of Death? It literally does not add up.

Consider a closer look at some other facts.

Of course, Jehovah’s Witnesses could not possibly be persuaded by mere facts and figures. As a remarkable demonstration of the power of the deluding influence that presently grips Jehovah’s Witnesses, the Watchtower has convinced millions of otherwise rational people that there cannot be another world war in the future, coupled with widespread food shortages and global pandemics. But obviously there can be a war that far exceeds the horror wrought by the First World War. Some intelligent people consider world war three to not only be inevitable, but imminent. And there are evil men who are determined to bring it about.

There is another line of reasoning, one which totally repudiates the Watchtower’s 1914 doctrine, provided one is willing to honestly reason upon the facts. Follow with me, please.

NOT ONE OF THEIR NAMES HAS BEEN WRITTEN IN THE SCROLL

As an immediate knock-on effect of the Devil’s violent eviction from Heaven the political system under his control suffers a mortal blow. Afterwards it revives and persecutes God’s sons for 1,260 days, also expressed as 42 months. After the beast revives from its seeming death it also compels all of mankind to worship it. The 13th chapter of Revelation indicates that all who do so will receive the irreversible judgment of everlasting death. Verse eight states:  “And all those who dwell on the earth will worship it. From the founding of the world, not one of their names has been written in the scroll of life of the Lamb who was slaughtered.”

Since it is obvious that Satan’s expulsion is directly related to the deathblow inflicted on the beast, the Watchtower is compelled to make the preposterous claim that the wild beast suffered its mortal blow and went into the symbolic abyss as a result of the First World War, but it emerged afterwards.* Besides the inconvenient facts that the Anglo-American alliance was victorious and neither London or Washington experienced anything remotely analogous to a mortal head wound, and the League of Nations was a farce —the United States not even being a member of it —nevertheless, Jehovah’s Witnesses have been deluded into imagining that Revelation has been fulfilled. It is considered to be beyond dispute.

But if it were true, if the beast had been wounded and revived back in the early 20th century, that means that not one person of the bygone generation who may have been a supporter of the political system will receive a resurrection. And the billions now living who promote the state cannot possibly avoid permanent death either. Yet, around the world Jehovah’s Witnesses preach a message of hope and salvation to the very multitudes who are supposedly already irrevocably doomed to everlasting death. And Jehovah’s Witnesses are oblivious to the spectacular contradiction. Such is the power of the deluding influence the Watchtower wields over them.

There is an emotional component that weighs heavy in advancing the delusion. It is fear. It terrifies Jehovah’s Witnesses to even contemplate the possibility that the Governing Body could be wrong, especially on something as monumental as the coming of Christ.

Being one of Jehovah’s Witnesses is not like being a Catholic or Baptist or whatever, not if you are all in anyway. Jehovah’s Witnesses make a huge commitment —devoting their lives to the Cause, possibly suffering persecution from family or friends; spending many hours every week in study, meeting attendance and field service.

To make that sort of commitment Jehovah’s Witnesses wholeheartedly believe that Jehovah has provided the faithful and discreet slave as an infallible guide. Although the Governing Body does not expressly claim infallibility, it is certainly implied —the overriding assumption being that if they are wrong God would surely fix it. God would never allow the slave to be misled or mislead the flock. Therefore, to question the Watchtower’s teachings —even their interpretation of prophecy —is considered rank apostasy. Yet, what does the scripture say? — “And the wisdom of their wise men will perish, and the understanding of their discreet men will be hidden.” 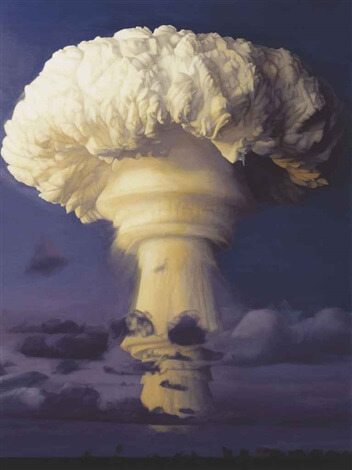 The question is, what happens when the missiles start flying and mushroom clouds cast their deadly pall over the world? Jesus has the answer: “Then, too, many will be stumbled and will betray one another and will hate one another.”

Sadly, when the infallible slave is proven to have made a grievous error the faith of many will be shattered. And when the Devil comes down in anger and the truth is outlawed, those whose faith has merely been in men will hate their former brothers and betray them to the tyrants. That is why Jehovah allows for the deluding influence the Watchtower wields. He wants to find out if you really have the faith. Or as it says in Malachi: “But who will endure the day of his coming, and who will be able to stand when he appears?”

Note: The original edition of the New World Translation used the expression “operation of error.” The latest revision uses a more appropriate phrase: “deluding influence.” There are a number of articles on this site exploring the significance of the man of lawlessness and the nature of the deluding influence he wields —culminating in the emergence of the antichrist.

*The Watchtower claims that there are actually two different seven headed beasts that emerge from the abyss. But one abyss is interpreted to mean the sea of mankind, which, of course, is part of the delusion.