The JW.org home page features an article entitled: Are We Running Out of Time? The sub caption on the article page states:

The predictions of the Doomsday Clock will not be fulfilled, because God promises a bright future for mankind and the earth.

First, what exactly is the Doomsday Clock, and what are the predictions implied by the clock’s settings? 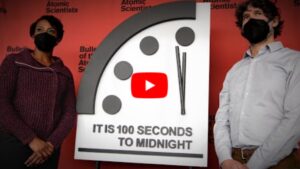 Published by the Bulletin of Atomic Scientists, the Doomsday Clock was established immediately after the first use of atomic weapons that punctuated the end of the last world war. Midnight symbolizes nuclear war—doom. To indicate the state of the world’s numerous conflictions and the nearness of nuclear war the minute hand of the clock is either advanced or moved back. For example, after the USSR was disbanded the time was moved back to 17 minutes till the top of the hour. Where is the minute hand now? It is the closest to midnight than it has ever been. In fact, to dramatize the current world situation the Doomsday Clock is now not even measured in minutes. What time is it then, you ask? It is 100 seconds to midnight.

Evidently, the Watchtower is aware of the Doomsday Clock’s present ominous setting; hence, the article claiming there will be no doomsday—only a bright future. With the help of the graphics department, the Watchtower presents the image of a man trying to hold back the countdown to doom contrasted with an image on the article page of the clock setting past midnight and a man waltzing into paradise. There will be no doomsday saith the seers. 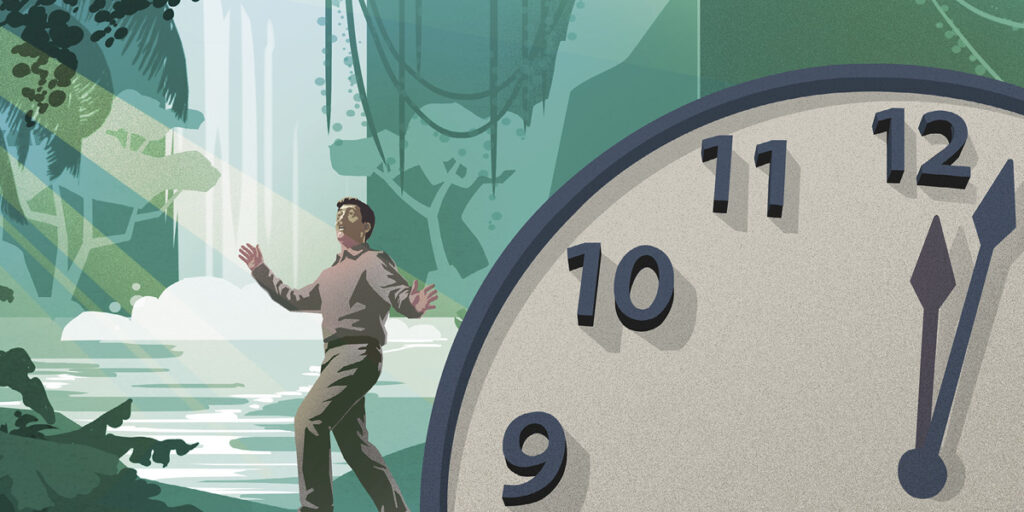 While we are grateful that God has assured us in the pages of the Bible that he will not allow the earth to be completely ruined and that a great crowd of people will survive the violent end of this world and become the nucleus of a brand new world, we should not assume that the transition will be as easy and painless as the Watchtower’s graphic arts department depicts.

Evidently, God is going to allow the Doomsday Clock to strike midnight. No matter what men might try to do to prevent it the great tribulation is going to come upon the world. What is the great tribulation about which Jesus spoke? It is undoubtedly a nuclear war, at least a limited exchange. Regarding it, Christ foretold: “People will become faint out of fear and expectation of the things coming upon the inhabited earth, for the powers of the heavens will be shaken.” — Luke 21:26

There is no question a full-scale nuclear war would destroy the world and render the earth uninhabitable for thousands of years. There are more than enough weapons of mass destruction to exterminate all life on earth many times over.

Apparently, though, God is going to allow men under the influence of demons to demonstrate to the full their own madness and the insanity of producing thousands of doomsday weapons in the first place, at which point Jehovah will intervene and prevent the demonic madness from becoming an extinction event. While nuclear war used to be unthinkable a few weeks ago a US senator suggested unleashing a first strike holocaust on Russia. Yes, the unthinkable is now under discussion at the highest level of government. In regards to an extinction event, what did Jesus say: “For then there will be great tribulation such as has not occurred since the world’s beginning until now, no, nor will occur again. In fact, unless those days were cut short, no flesh would be saved; but on account of the chosen ones those days will be cut short.” — Matthew 24:21-22

“Unless those days were cut short, no flesh would be saved” certainly implies that divine intervention will be necessary to prevent the utter extinction of mankind.

Is the Governing Body oblivious to the implications of Jesus’ prophecy? Yes, sadly, they must be.

The Watchtower originally derived its name from the Bible’s depiction of a literal watch tower, which was a lookout post where watchmen could scan the distance and sound an early warning in case of approaching invaders. Since it was founded in 1879 the Watchtower has functioned as a lookout.

In more recent years, however, it is as though the watchmen have all nodded off or wandered away from their post. Their dereliction is reflected in kindergarten-level articles like the one under review.